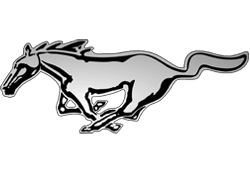 Experience the untamed magic of this American classic

The Mustang made its first public appearance on a racetrack in the 1964 Indianapolis 500. Mustangs won first and second in class at the Tour de France international rally. And have entered Drag, Stock and circuit racing.

As of August 2018, over 10 million Mustangs have been produced in the U.S.

Over five decades and six generations later, the Ford Mustang is still as popular as ever. Throughout the past five decades, Mustangs have been featured in many movies, TV shows, and songs.

Though the iconic Ford Mustang running horse decals are some of the most recognizable figures in the automotive industry. The vehicle’s name bears a different origin. It is one of the biggest misconceptions among Ford fans. The pony emblem in which everyone has come to know was not a direct influence for the branding of vehicle.

There are numerous conspiracies and urban legends of which how the Mustang got its name. Most authoritarians on the subject would agree that a World War II fighter plane was the original driving force behind the vehicle’s eventual naming.